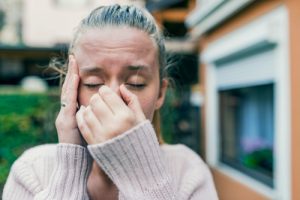 Both sleep apnea and sinusitis can lead to snoring, and they involve some of the same anatomies. When you’re asleep, your natural reflex is to breathe through your nose. However, the sinus inflammation and swelling associated with sinusitis will force you to instead breathe through your mouth. The soft tissue in the back of your throat that hangs down (called the uvula) and the soft palate relax when you’re sleeping. When the tissue blocks your airway, negative pressure may be created behind the soft palate, causing the soft tissue to vibrate and make you snore.

Sleep apnea occurs when the muscles in the back of your throat relax. These muscles support the soft palate and uvula, the tonsils, the sides of the throat and tongue. When these muscles relax, the airway closes as you breathe in. You can’t get enough air, lowering the oxygen level in your blood. The brain senses that you’re unable to breathe well and makes you wake up. With sleep apnea, this pattern can repeat many times throughout the night, preventing you from getting a good night’s sleep.

While there are similarities between sinusitis and sleep apnea, the connection between the two sleep conditions is not clear, according to a study published in Scientific Reports. For five years, researchers followed 971 patients who had sleep apnea and 4,855 who did not. The researchers found that less than 7% of those with sleep apnea were later diagnosed with sinusitis. Of those without sleep apnea, only 2% also developed sinusitis. Therefore, the study found there was not a significant correlation between the two. A sleep apnea diagnosis does not mean that you will develop sinusitis and vice versa. However, there is a small increase in the risk a patient with sleep apnea will also have sinusitis.

If a patient has a mild case of sleep apnea, doctors typically recommend lifestyle changes, such as losing weight and sleeping on your side instead of your back or stomach. Other treatments are considered in more severe cases.

It’s important to remember that sleep apnea is a sleep disorder, whereas sinusitis is a temporary infection. Sinusitis will eventually go away or can be treated with antibiotics. Once you have addressed the sinusitis, you won’t suffer from breathing problems at night caused by an infection. However, chronic sinusitis does increase your risk of sleep apnea caused by nasal congestion. Sleep apnea cannot be treated with medication and will not simply clear up on its own. If you suspect you may have sleep apnea or chronic sinusitis, see a doctor as soon as possible.

Are you concerned that you or a loved one may be suffering from sleep apnea? Consult with the experts at Silent Night Therapy to find out more about our testing and solutions to this common problem. Call us at (631) 983-2463 to get the answers you’re looking for today.