The Five Stages of Sleep

Why Do We Sleep? 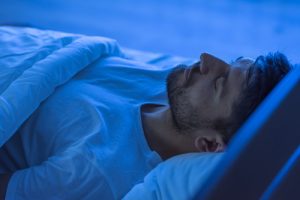 A precise answer to this question remains largely unknown. Sleep is a phenomenon common to all animals in some form. This universality suggests that the act of sleeping likely has some evolutionary relevance. Humans spend approximately one-third of their life, or about eight hours per night, sleeping.

Certainly, we feel better when we sleep well.

Sleep is not a homogenous process and appears to go through multiple discrete cycles during any given night. We gain insight into these various stages by using devices which measures the electrical patterns of the brain – the electroencephalograph (EEG); muscle tone of the body – is measured by the electromyograph (EMG); and for eye movements, the electro-oculography (EOG). All of this information is recorded simultaneously during sleep, and we gain a “window” into characteristic patterns. Naturally, all this information has to be tabulated, scored and interpreted.  Scoring and interpretation of the various input waveforms are based on a set of “rules” developed by the American Academy of Sleep Medicine (AASM).

Stage N3 tends to occur more in the first half of the night and particularly at the beginning of the night. It is often more difficult to arouse sleepers during stage N3 sleep, and stage N3 is a typical time for NREM-parasomnias (such as sleepwalking) to occur.

Based on early studies in which patients were awoken out of REM sleep, REM sleep has typically been associated with vivid dreaming. Although REM sleep accounts for less than a quarter of total sleep time it’s function may be a time of memory consolidation during which important memories are retained, and less critical neural connections are pruned.

Why is the Sleep Cycle Important?

Alterations in sleep architecture very often reflect various medical conditions. With specific dental and therapeutic interventions, most of these are highly treatable. A representative few examples include the following:

Are you struggling to sleep at night? Do you feel as though you aren’t getting a good enough night’s sleep to function during the day? If so, make an appointment with Dr. Brown and the OSA team today by calling (631) 983-2463 or contact us online.