The Effects of Oxygen Inhalation and Sleep Apnea

An estimated 50% of all people will have an issue with snoring at some point during their lives. Snoring can become more prevalent as you get older, and is typically more common in men (40 percent of the population). However, 24 percent of women are also habitual snorers. For the most part, mild snoring—though potentially annoying to your spouse of partner—is harmless, but it can be a symptom of a far larger problem: obstructive sleep apnea. 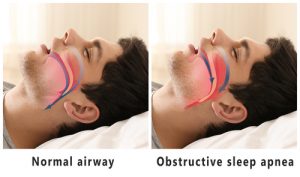 Obstructive sleep apnea occurs when an individual temporarily stops breathing while asleep and can happen between four and 30 times every hour depending on the individual.

For men, heavy snoring and sleep apnea may put them at an increased risk of hypertension, angina, stroke, and neuropsychologic dysfunction.

The idea of giving patients suffering from sleep apnea oxygen during the night seems logical on the surface. Repeated pauses in breathing lowers oxygen levels in the blood during the night; thereby, giving the patient supplemental oxygen through a plastic tubing called a nasal cannula should stabilize oxygen levels and decrease the risk of future medical problems that are common in people with severe sleep apnea.

Unfortunately, supplemental oxygen has mixed, and in some cases, dangerous results. While the oxygen level in the blood does improve, the effect on the apnea-hypopnea index (AHI) has been found to be negligible and severe drowsiness during the daytime—a common side effect of sleep apnea—doesn’t improve. Additionally, supplemental oxygen doesn’t target the high and dangerous levels of excess carbon dioxide that form during the night.

There are instances where supplemental oxygen is beneficial. Individuals suffering from chronic obstructive pulmonary disease (COPD) like emphysema without also suffering from sleep apnea have benefited from oxygen during the night. But when oxygen is used without relieving the airway obstruction that so often causes heavy snoring and sleep apnea, carbon dioxide levels increase resulting in patients waking up feeling confused or with serious headaches.

Sleep apnea is often caused by the collapse of tissues of the upper airway partially or even completely closing the throat. If this isn’t treated through bilevel therapy or in some cases surgery, oxygen will not reach the lungs.

If you or a loved one is suffering from sleep apnea, be sure to seek treatment right away and get a better night’s sleep. Dr. Brown and the OSA team are here to help those with a history of snoring, who have obstructive sleep apnea, and those who can’t tolerate wearing a CPAP. Our team can diagnose and treat your sleep apnea with the use of effective oral appliances. Call us at (631) 983-2463 to schedule a consultation with us today.