Sleep Apnea May Increase Your Risk of Alzheimer’s Disease 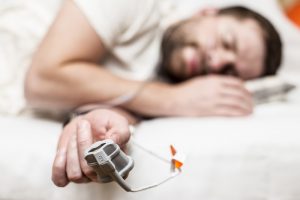 A recent study from New York University examined data from nearly 2,500 people aged 55 to 90, some with normal cognitive function, some with mild memory loss, and some with Alzheimer’s. The researchers asked all participants about their sleeping habits and if they had sleep apnea or if they snored. The results showed that participants who exhibited breathing problems developed memory issues around ten years earlier than those without breathing issues. Even after factoring in genetic and environmental factors, the researchers still saw a clear connection between sleep apnea and an increased risk of Alzheimer’s disease.

While the exact connection between sleep apnea and Alzheimer’s is not clear, researchers believe that the effects of the short periods in which the person is not breathing may be more harmful than originally believed. These periods of oxygen deprivation can build up and cause long-term effects. Oxygen deprivation has been shown to have greater harm in areas of the brain that are linked to the onset of Alzheimer’s.

The good news is that you can reduce or even reverse the effects of sleep apnea and the resulting memory loss. You deserve the peace of mind that comes with a good night’s sleep. At Silent Night Therapy, diagnosis and treatment is easy and effective! We will meet with you, test and review your options, help fit you with the proper oral appliance, and will ensure the proper fit. You will be amazed at the results, and will immediately know the benefits of our sleep apnea treatment. Don’t wait, contact us today at (631) 983-2463  to schedule an appointment.