Signs your spouse may have sleep apnea 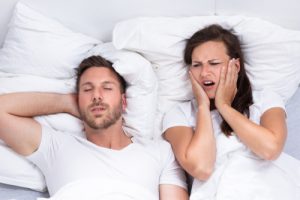 The word apnea comes from Ancient Greek and means “absence of breathing.” It is more commonly defined as a temporary cessation of breathing, usually during sleep.

Sleep apnea can be a serious sleep disorder that commonly causes snoring. Not all sleep apnea cases involve snoring though.

Certain types of people can be more susceptible to sleep apnea depending on their anatomy or living conditions. In some cases, sleep apnea may be overcome through simple lifestyle changes but other cases may require medical devices or surgery.

The Different Types of Sleep Apnea

Sleep apnea can affect people of all ages, including children. People may be more likely to suffer from sleep apnea if they are male, overweight, or over 40 years of age. Other possible causes might include people simply having large necks, tonsils, or tongues, gastroesophageal reflux disease (GERD), or family histories of sleep apnea.

Most people exhibit one or more signs that they are suffering from sleep apnea. Certain symptoms are easier to identify than others.

In general, some of the most common signs of sleep apnea include, but are not limited to:

Some people wake up gasping for air while others have difficulty falling asleep. When a person is exhibiting any symptoms of sleep apnea, it is usually in their best interest to speak to a medical professional about the signs they have noticed.]

Silent Night Therapy understands the effects that sleep issues can have on individuals. We understand the steps that can be taken to help resolve sleep apnea issues. Call (631) 983-2463 or contact us online to have our team help you understand all of your possible improved sleep options.